I'm back on the emotional rollercoaster again. This feels just like when I was going to Tokyo in 2012 and went from "can't go to Playzone" to "might be able to go" to "no, I don't have a ticket" to "I've been to Playzone" - but even worse.

I got the news yesterday that Hey! Say! JUMP would go on a tour later this year. I was very hopeful at first since I will be in Tokyo in the beginning of August for Playzone, and I thought "it would be awesome if I could see a JUMP concert when I'm there!". But then today we got the tour schedule and my hope turned into despair: 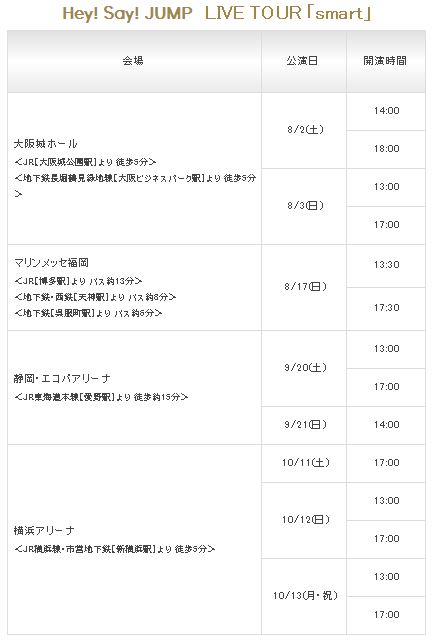 When I am in Tokyo, they are in Osaka... And when they come to Tokyo, I'm back in Sweden again. So, what should I do? At first I just thought "oh well, maybe next year... *sob* " but now I've been thinking for some time, and why not go to Osaka to see them? I do have the possibility time-wise, I just don't know if I can afford it...

I hate being on this rollercoaster of emotions! I really really want to see JUMP live again! It's been a year since the last time, and those shows were among the most amazing shows I've ever been to in my whole life. I meant to see them in Nagano as well the same year, but was too late for the ticket application... So I would really like to see them in Osaka now that I've got the chance. Oh, what should I do???
Tags: » concerts, × ramblings, ♫ hey say jump
Subscribe