I thought maybe I should have some kind of introduction post. There's not much here yet, but I'll add to it at some later point.

I have loved Yuma's acting from before I started counting myself a Yuma fan. So there's no wonder I was beyond myself from happiness when I got the chance to see him play the lead role in a theatre adaption of Oscar Wilde's The Picture of Dorian Gray - not once, not twice, but four times! Yeah, call me crazy, but this play was the reason I went to Japan that time, so I thought I should do the most of it - and I also enjoyed the play very very much, so it was totally worth it!

justironic and another friend I went to see KAT-TUN's 9arter Tour at Tokyo Dome on May 10th. Dome concerts are special in themselves, but I've heard that KAT-TUN concerts are worth going to even if you're not a fan. I like KAT-TUN well enough and listen to their songs more often than many other JE groups, so I was very happy to finally get to see them. And I must say, their 9uarter Tour in Tokyo Dome was one of the best concerts I've ever been to!

Finally, here's a photo of Junno wearing one of my favorite costumes, from the RAY and それぞれの空 section of the concert.

(This is yesterday's news, but I had no time to update my blog then...)

Taguchi will release a solo single in November this year! It's called Hero. And apparently there will be some kind of release event as well. Too bad I'm not going to Tokyo until December... But I'm happy about the release anyway!

So I get it that a lot of KAT-TUN fans are angry with him right now. When he quit Johnny's he said he would leave the entertainment industry completely. And KAT-TUN are on a hiatus because of him. And now he'll come back during their hiatus. I get the angry feelings. I mean, I would prefer that he stayed with KAT-TUN or returned to them, after what he did.

But I can't help being so so happy right now. I totally fell for him when I saw KAT-TUN live in 2015, and I kept falling for him throughout the year when I watched KAT-TUN stuff (old and new). I was devastated when he announced he was leaving, and I haven't been able to watch the tour dvd of 2015 without crying - not to mention being able to type up my concert report from that show.

That's why I'm happy he's coming back. My guess is he will perform in a different genre that I'm not very into, and I won't probably have any chance to see him live again soon. But he's coming back, he'll be making music and performing. And that's what matters to me, because I love his voice, his moves and his dorky cheerful personality.

I wasn't really planning to go see Takizawa Kabuki in 2015 because there were already many other shows I had planned to see. But then my friend told me she had won several tickets and had two spares, so I went together with

justironic and we both agreed that we were sooo lucky to see the 10th anniversary of Takizawa Kabuki and it was amazing! For me, getting to see Yabu together with Takki in such a butai was already more than I could have wished for!

I've had more than 4 months to prepare for this day: the day when Taguchi Junnosuke has left KAT-TUN and Johnnys'. Lots of time to prepare doesn't make it easier though. My emotions are so mixed up - I hate that he's left the group and would have loved for him to stay and keep spreading his smile and sillyness the same way as before, but at the same time of course I want him to follow his heart and do whatever he feels is the right thing to do. If he felt that it was time for him to start a new journey and do something different in his life, of course I want him to do that and be happy.

No matter what he decides to do later on, I hope he is successful and happy. I am so happy and grateful for all he's done in KAT-TUN, and I feel so blessed to have been able to see KAT-TUN live in Tokyo Dome as a 4-member group. Those memories will stay with me forever. I've spent half the afternoon crying, especially when the profile changed on Johnnys-net. And now I will torture myself by watching the last DVD (well, as much as I feel capable of watching before I break down completely). I will always love and remember Taguchi, and I hope that 3-member KAT-TUN will be able to continue forward and stay successful! 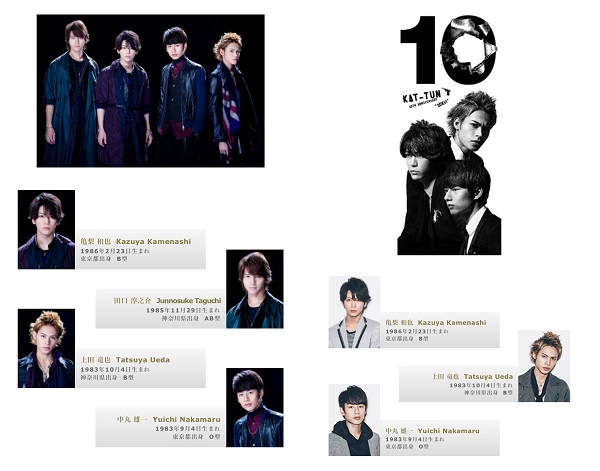 I don't know what happened to me for he past year or so, but I've suddenly got this thing for Inoo in Hey! Say! JUMP. It's not like he's becoming one of my favorite idols or something (I have my favorites and very clearly so) - I just...find myself drawn to him a little extra than before. So when I won tickets for me and

justironic for his stageplay カラフト伯父 (Karafuto ojisan) in Tokyo I was thrilled. Both over the fact that I'd get to see Inoo acting on stage, and over getting to go to a Japanese stageplay again (the last time was back in 2013). Our seats were on the first balcony, on the right-hand side only two sections from the stage.

Today it was announced that Yuma's first solo concert will be released on DVD and Bluray on January 13 next year! However, it will only be available for pre-order through his record label's website during November 20 - December 8. (I love it how they make things so easy for foreign fans - NOT.)

Just yesterday when I was typing down my notes from the concert in my report here on LJ, I was thinking about how awesome it would be if the concert was actually released on DVD eventually. Or at least a digest on the next album or something. Just... some sort of footage, you know?

We get a DVD / Bluray release! Finally! I was at work when I got the news and I had to fight back my tears of joy or my co-workers would have believed I had finally lost it and gone completely nuts.

At this moment, I couldn't be much happier. WE GET A DVD RELEASE OF YUMA'S FIRST SOLO CONCERT!! 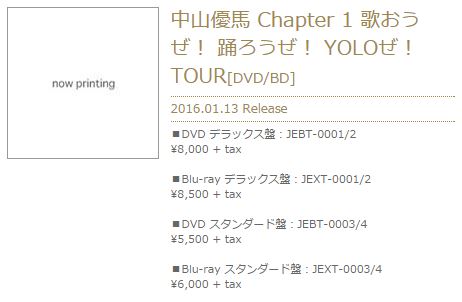 justironic at Tokyo Dome City Hall on May 2nd. I loved every second of the show!

I'm so excited, the new album by Hey! Say! JUMP was announced today! It's called JUMPing CAR which is a hilarious name if you ask me. But I think the track list looks as interesting as always, and I'm very curious about the songs by the new sub-units (anyone else except me who thinks the song by Yamada and Keito will be a ballad?). There are three versions and of course I'd like to buy all of them if I can... I can't wait to hear all the new songs!!